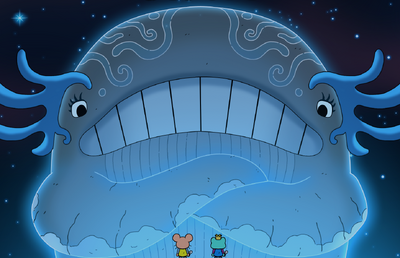 The Dittoan goddess, with players in front

Serendipity is the Dittoan goddess of good - and often unexpected - fortune. They are described in the older fables as taking the form of a whale. Although this appears odd now in ancient Dittoan fishing communities whales were seen as creatures that brought great luck; to see one was a portent of good fortune to come.

Serendipity was not granted passage into the Arcadian Circle when Ditto joined the Empire perhaps due to them being a more elusive presence than Fate. As such they are not an official deity within the Arcadian faith. Very few verifiable eyewitness accounts exist. Indeed most references are to be found in older texts that prioritised fantasy over mundane reality - but many still nonetheless believe in Their existence. Modern sightings of Serendipity usually reference a female with long wavy blonde hair usually glimpsed in the periphery of a catastrophe or incident that - almost miraculously - resolves with no loss of life. - From the ingame description.